I’ve build an extra 23cm receiver for the regional 23cm repeater system PI6NOS in Hilversum. Building was quite straightforward. Just take a Raspberry Pi, an RTL-SDR stick and connect it to an antenna (using a band-pass filter not to overload the RTL-stick with crap). 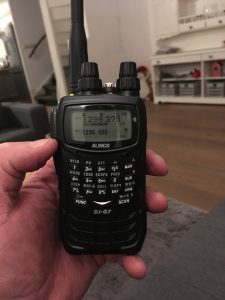 The repeater system is based on an svxlink controller so just installing remotetrx on the RPi is enough to get started.  And since we’re hamradio operators and not internet amateurs, the remote receiver is connected via 5 GHz HAMNET. It even uses an indirect link from my house via the IJsselstein tower towards the Hilversum tower where the controller and transmitter is located.

There are still some improvements to be made and I have to mount a dedicated antenna for the system.  There is only one problem: when using my Alinco DJ-G5 triband portable on 23cm the signal, even with 100 mWatt, is blocking the receiver.