Yesterday, Mischa (PA1OKZ) and I went to the tower in Hilversum to do some maintenance on PI2NOS. We took time to mount the first HAMNET-dish directing to PI1AMS / PI1RYS in Amsterdam-West (25km). The dish is located indoor behind a window about 110 meter HAAT. The Amsterdam site will be 55 meter HAAT. Line of Sight shoud not be a problem.

The Amsterdam site wlll be connected in the first week of januari 2015. We’re quite curious about the SNR-ratio’s. The link will be tested with 1 Watts EIRP in the ISM band until a license is in. Don’t mind the sticker on the dish. That was for identifying the different links in my lab set-up at home. 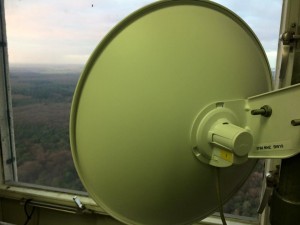 Update: The Amsterdam site is connected by Peter, PA3PM. We have a link over 29km distance. Still some improvements to make, but since we’re using Wifi in the ISM bands with the reduced ISM power-levels, it’s not bad at all. The received signal is -73 dBm (S9+20 dB!), using 5 dBm transmit power on a 27 dBi dish in Hilversum  (1 Watt EIRP).