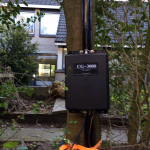 A few months back I switched from a magnetic loop antenna to a vertical one. There were two main reasons to do so. The first one is the ability to be able to remotely tune the antenna. With the I3VHF-loop I wasn’t able to. The second reason was to have support for the 80 (and soon to be released) 60-meter band. If 160 would work this would be a great benefit.
Using a 12-meter high SpiderBeam fiber pole, without the last section, a wire goes 10,5 meters up and 3,5 meters to the side, with a total length of 14 meters. This length is chosen because the wire was already in stock and isn’t resonating on any of the ham bands. The CG-3000 tuner will tune the wire to all bands, including 160-meters. But the topband isn’t really workable with S9 noise.

Last week I made about 200 QSO’s during the CQ-WW-DX SSB-contest to test the antenna. Lower bands in particular perform much, much better with the new set-up comparing to the I3VHF loop. On the 40-meter band, local QSO’s are quite impossible (No more ‘noise’ from 7077 kHz a.k.a. ‘CB channel 14’ in the Netherlands) and distances 1000 miles away are better. I’ve worked D4C in Cape Verde, Kuwait, a US West coast stations, Canada and Barbados in the Caribbean.