With a few hams on the club we’re busy building 13cm SSPA’s. The base equipment is ex 3G/UMTS equipment. There are two models availlable for around 10 euro’s and can be found on ham flea markets. The small module has an output of about 30 Watts, the big modules output is around 90 Watts. on 2140 MHz. Both are usable on 2350 MHz. First, let’s have a look at the stages and modules used. Goal is to use the SSPA for the Es’HailSat 2 uplink. See PA3FYM’s website for details about antennas used for this project. 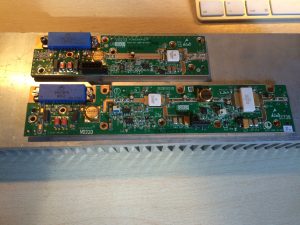 I’ve created an bypass in the first stage. The output of the LZ5HP transverter is about 2 Watts and, altough 1,5 dB to less, enough to feed the second stage. The alternative was to attenuate the TX-signal from the transverter with 30 dB from 2 Watts down to 1 mililWatt. Additional benefit is that the first stage (blue module) has an aplification of 31 dB wich will result in difficulties in the housing due to howling and crosstalk. By bypassing this module, that problem is solved the easy way. 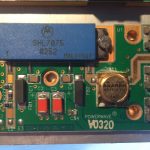 On the left, an Pi filter to attenuate the imput is clearely visable 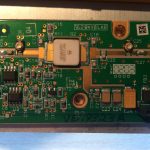 Fron this stage, the output will be around 30 Watts 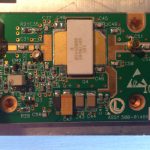 All is powered by 28 Volts (DC) and still work in progress. To be continued. 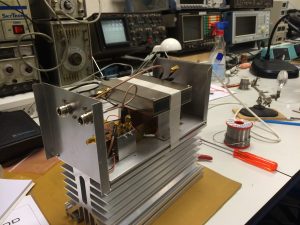